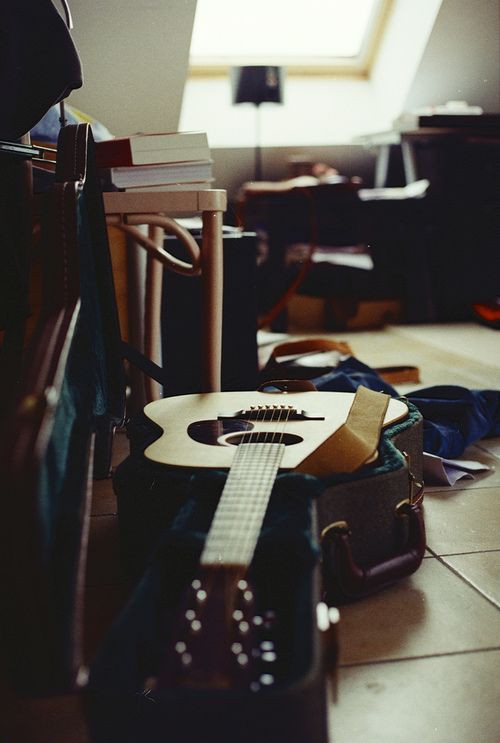 I looked inside to see his face and suddenly he saw me staring at him. I don’t know how but everything just stopped. I could  not help but gaze at those alluring, ocean blue eyes and everything else was fading at that moment. Everything felt so magical and suddenly I heard a clap around me, it was Riddhi, asking me to go along with her to the playground. I looked back from the glass of the door, but he wasn’t there. I felt so resentful, I could’ve At least asked him his name or something.

After that I used to look for him wherever I used to go but couldn’t find him. Until one day when I went to the canteen to buy a sandwich. I saw him again standing alone at the backside of the canteen smoking cigarette. I decided to approach him. I asked him ” Hey! You are the guy who was playing guitar in the music room. Right?!” He looked at me for a while like I was interrupting him, which I was.

He finally responded by saying “Yes”. I than introduced myself ” Hi! I am Vrushika, newcomer, by the way you play guitar really well! He didn’t even bother to look at me and said “Thanks” as I found him not at all interested in talking to me and was about to leave, Ridhi called out my name and I left.

She than asked me ” What were you doing there with that guy?”

” I saw him playing guitar in the music room, I just wanted to talk and he didn’t even looked at me. Such a rude guy;( ” -I replied. ” Yes, he is rude that’s why no one talks to him anymore and by the way his name is ‘Rehan’.”

“What! That’s him? Mayra’s boyfriend!”

” Hey! Where is my sandwich you went to get?”

“Oh! I forgot ‘SORRY’. I’ll bring it wait. No, it’s fine don’t go back. We’ll eat it tomorrow. Now Let’s go, class is about to start”- she said. I decided not to talk even see that guy again but that’s not what quite happened.

I auditioned for the school choir and got selected. I was happy as I love singing. So, I was excited to be a part of it. Next day, I went for the practice session and the first thing I saw was Rehan playing guitar and other students were singing the songs. He saw me entering the music room. My music teacher asked me to sit  and learn the lyrics. I did the same.

When I was done he told me to sit next to Rehan and practice with music. I wanted to say ‘No’ but didn’t wanted to think of me as disobeying his order. So I sat next to him to practice. He played his guitar and I sang. When we finished all the people who were there clapped for us and appreciated us both. I was smiling while he was just sitting.

Everyone got out of the room while I was finding my notebook in a hurry as I didn’t wanted to be all alone with Rehan and he was just sitting there with his guitar. It was all awkward and he suddenly said, “Umm..you sing well!” I was nervous so, just said, “Thanks” and quickly went out of the class.

P.S. This post is written by me in collaboration with Parul Rao. She is a wonderful writer and a truly amazing blogger. Do check out her posts! They are worth seeing. You can visit her blog here.